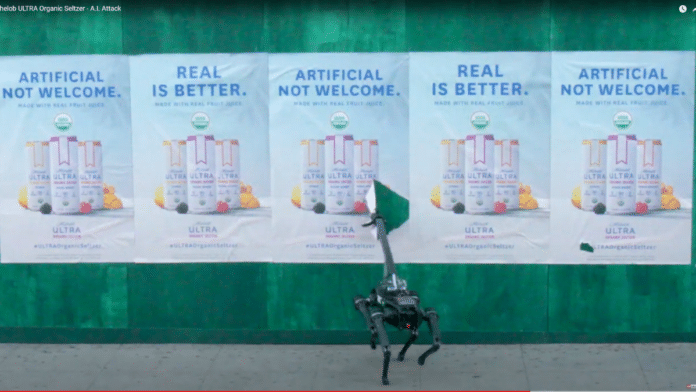 You have been warned. The colony of all things artificial is angry with Michelob ULTRA Organic hard seltzer, as the brand launched a campaign that preaches “Real Is Better” and “Artificial Not Welcome.” Artificial intelligence-powered dog-like robots could be seen removing out-of-home advertising materials on the streets of Los Angeles. The social media attack by the bots ensued, and is expected to peak on Monday, March 22.

Don’t believe us? Just watch this video, with four-legged AI creature in action:

The AI attack is most apparent with the hacking of the company’s Twitter account. Bots are taking the matter so seriously, that they are offering consumers who reply to a promotional tweet on March 22 and pledge to NOT try the new beverage offerings will be entered into a sweepstakes for one bitcoin, currently valued at approximately $58,899, according to today’s market at press time.

At issue with the deepfake crowd is the Mich ULTRA organic hard seltzer ingredient list, which includes real, organic fruit juice and no added sugar. Spreading of fake news and artificial thoughts is difficult when major brands, such as this one from Anheuser-Busch (NYSE: BUD) created hard seltzer with no artificial ingredients.

Strange characters, backwards writing, and glitchy videos permeated the brand’s Twitter account, which has approximately 101,000 followers. The Instagram account appears also to have been affected, although to a lesser degree. The company first began posting messages such as “Keep it real” and “not artificial” on March 10. The aggressive artificial fans rapidly mounted a counterattack that can be seen on videos starting March 16.

So far the LinkedIn account for the parent company looks safe, but consider yourself warned.