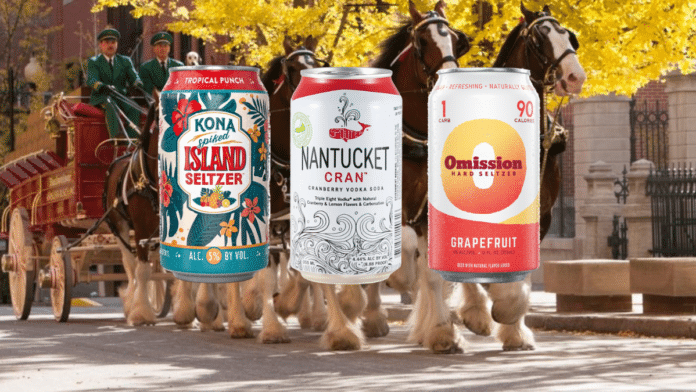 The Anheuser-Busch (A-B) family of brands is growing; the acquisition of Craft Brew Alliance (CBA) was completed this week. CBA will officially be nestled under Anheuser-Busch’s Brewers Collective, which A-B describes as “a high-performing collection of craft partners committed to providing consumers with innovative, quality beers and investing in their local communities.”

The deal will expand availability for all of the craft breweries involved, and Anheuser-Busch is eager to welcome the CBA brands to the family. “Connecting with consumers through our brands is at the forefront of everything we do,” said CEO Michel Doukeris. “After a successful partnership that spans more than 25 years, we are excited to now fully welcome CBA into the A-B family and continue to work together to bring more consumers, in more communities, even more choices for every occasion.”

Here’s a closer look at the craft hard seltzers A-B hopes to bring to your local cooler.

Cisco Brewer’s Triple Eight Distillery launched the regional favorite Nantucket Craft Cocktails in May. Made from its premium vodkas, the ready-to-drink (RTD) cocktail is available in Cran or Blue, which are vodka sodas mixed with cranberry or blueberry, respectively. Both flavors contain 4.4 percent ABV and are gluten-free.

Omission Hard Seltzer wants to be “your favorite all-natural refreshment.” At four percent ABV, 90 calories, one carb, and zero sugars, Omission boasts a shockingly simple ingredient list: carbonated water, alcohol from organic cane sugar, hops, and natural flavor. A variety 12 pack includes Grapefruit, Lime, Pomegranate Blueberry Acai, and Orange Twist. As a brewery, Omission is committed to making gluten-free craft beverages using natural ingredients. It was born after the owner’s wife was diagnosed with celiac disease, and he wanted to create a naturally gluten-free beer they could enjoy together.

Between its three new premium hard seltzers and the hard ciders offered by Appalachian Mountain Brewery and Square Mile Cider Co., the new partnership between A-B and CBA is good news for beer enthusiasts and seltzer aficionados alike.