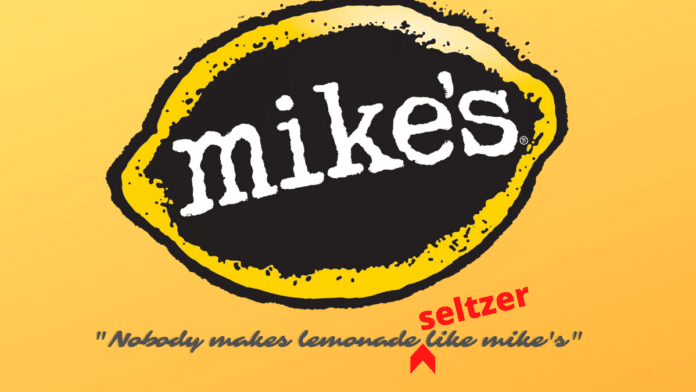 The company applied for registration with the US Patent and Trademark Office for several trademarks related to the new venture, billing it as “The full flavor lemonade seltzer,” and “Nobody makes lemonade like Mike’s.”

Mike’s Hard Lemonade was a pioneer

Mike’s Hard Lemonade has enjoyed a recent boost in popularity thanks to the rise of ready-to-drink (RTD), with sales up by one hundred percent this year. In fact, most credit Mike’s Hard as being the early pioneer among RTD beverage options.

When the iconic hard lemonade was first introduced in Canada in 1997, it was spiked with vodka. However, when the drink was introduced to US consumers in 1999, the vodka was replaced with a proprietary malt liquor. Even as a malt beverage, Mike’s Hard still represented an exciting new world of possibilities to non-beer drinkers; Mike’s prides itself on being both easy to drink and easy to love.

Mark Anthony Brands knows a thing or two about appealing to legal-drinking-age (LDA) consumers who want convenient, RTD options but may not love the taste of beer. In addition to Mike’s Hard, the company owns White Claw, the spiked and sparkling water credited with launching the hard seltzer movement.

Mark Anthony first introduced White Claw in 2016 but its popularity started to really surge in 2019, culminating in the now legendary White Claw shortage toward the end of the summer. During calendar year 2019 hard seltzer sales grew by 216 percent, making it a multi-billion dollar industry. Sales are expected to surpass $5 billion by 2023.

To contextualize that growth, White Claw currently enjoys just under sixty percent of all hard seltzer sales. By comparison, the second best-selling seltzer, the Boston Beer Company’s Truly, is right around 20 percent.

In addition to driving sales of the new hard seltzer industry, White Claw Hard Seltzer and its sleek, skinny cans have become iconic. It set the standard for the entire category with its lighter, low calorie profile, low ABV, and variety 12-pack sporting four fruity flavors.

Mark Anthony’s hard seltzer has earned its place in popular culture, spawning the popular rhyme observing how there are “no laws when you’re drinking White Claw.” The beverage even enjoys a prominent place in the Cole Swindell song “Single Saturday Night,” when the narrator meets his future girlfriend after noticing her “pretty red lips working on a White Claw.”

One of White Claw’s biggest competitors – Truly Spiked & Sparkling – released its own lemonade hard seltzer earlier this year. Billed as “the perfect mix of lemonade and seltzer,” the drink still boasts a light profile at 100 calories and one gram of sugar per 12 ounce can. Truly Lemonade Hard Seltzer comes in Strawberry Lemonade, Mango Lemonade, Black Cherry Lemonade, and Original Lemonade.

Mike’s Hard Lemonade hasn’t hinted yet as to whether they will release any flavors of hard seltzer other than classic sparkling lemonade. Yet the original Mike’s Hard bottled RTD itself comes in over 12 flavors, including the fall favorite Cranberry Lemonade, so it is likely that we will at least see some seasonal releases.

Mike’s Hard Seltzer in the UK

The Mike’s brand released a hard seltzer last year in the UK, thanks to a partnership with ZX Ventures, AB InBev’s global arm.

Mike’s Hard Seltzer is available in Black Cherry, Lemon, and Lime. Each can contains 100 calories, two grams of sugar, and real fruit flavor.

All three flavors are also both vegan and gluten-free, and contain five percent ABV.

“Since our initial launch last year we’ve seen tremendous growth in the hard seltzer space. As people in the UK actively try to live healthier lives, they are looking for more options in the ready-to-drink space that deliver on taste but remain light and refreshing, relying on natural flavours,” said the brand’s product owner, Ana De La Guardia.

“Our product is all of the fun without the compromises, and we want consumers to taste that. We are excited to launch with our new name and formulation in some of the UK’s leading supermarkets, and we’ll be looking to expand our footprint as demand for this category inevitably continues to grow,” she added.

So far Mike’s hard seltzer’s sales have been strong in the UK, with sales set to expand to several new grocery chains this month. Moving forward, Mike’s Hard Seltzer will be available at all Tesco and Morrisons stores.

Mark Anthony’s other US Products

While the US release of Mike’s Hard Lemonade Seltzer will likely be quite different from its British counterpart, we are excited to see what the seltzer experts at Mark Anthony Brands do with its hard lemonade seltzer. The company also makes a higher ABV option, called Mike’s Harder, which contains eight percent ABV. Will they similarly release an imperial version of the seltzer?

Mike’s Harder comes in a variety eight pack of 16 ounce cans, containing two each of Cranberry, Lemonade, Purple Grape, and Strawberry. It also comes in a tallboy 23.5 ounce can.

Given the industry-making popularity of Mark Anthony Brand’s signature brands – Mike’s Hard Lemonade and now White Claw – the new hard seltzer is likely to be a hit. With a release date of March 2021, the spiked and sparkling lemonade will launch just in time for spring, which is great timing for its profile.  We expect to see other brands timing release in Q1 2021.

With the summery kick of lemonade and the lighter, low alcohol profile of hard seltzer, Mike’s Hard Lemonade Seltzer is a sessionable beverage made for summer gatherings. While we’re deep in the second surge of an unprecedented global pandemic, it is anyone’s guess what next summer will look like, but knowing that this effervescent lemonade is on the horizon gives us one guaranteed bright spot.