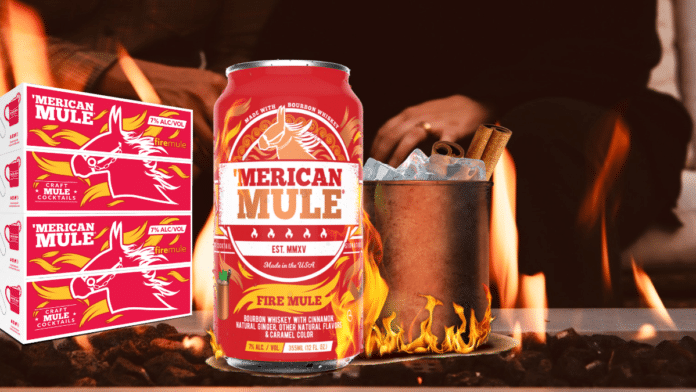 Prepare to feel the heat of this unconventional winter warmer. Last week, the canned cocktail company, ‘Merican Mule, officially announced the launch of their new winter seasonal, the Fire Mule.

‘Merican Mule, founded in 2015, produces a line of creative, bartender quality takes on the classic copper-mug Mule. The Fire Mule has — for a limited time —  joined the ‘Merican Mule lineup which includes the company’s flagship Moscow Mule (made with vodka), Mexican Mule (tequila), Tropical Mule (rum) and Southern Mule (bourbon).

“The fire mule is made with bourbon whiskey, cinnamon and ginger, and one of the things that makes it a little bit different than our other flavors is that it’s going to be a little spicy,” Mahoney said. “So, the ginger is almost a hot ginger to match how we’re marketing it.”

The Fire Mule marks the second seasonal offering from the canned cocktail company and follows in the footsteps of their highly successful fall seasonal, the Pumpkin Spice Mule.

“It almost created a little frustration sometimes because stores ran out of it so fast!” Mahoney said of their first seasonal.

“We looked at the craft beer space and [saw] what they do and how they have a spring seasonal, summer seasonal, fall seasonal, winter seasonal,” Mahoney said. “It kind of just keeps it interesting throughout the year.”

In the case of ‘Merican Mule, the nature of their brand makes it ripe for seasonal experimentation.

“We obviously have the opportunity because we’re a Mule,” said Mahoney. “The reality is, at the center and heart of a Mule is the ginger beer, and if you can perfect that, changing the other elements — like either the liquor or the fruits — [can] give it some character or identity.”

The Fire Mule is currently available in retail locations throughout New England and the Southern United States, including major retailers Total Wine, Bevmax, Target and Whole Foods. The Fire Mule can also be purchased through the ‘Merican Mule website as well as Drizly.

Mahoney is exceptionally excited for the release of Fire Mule, as the company steps out of their comfort zone with this bold seasonal.

“[The] other Mules that we’ve done to date, it’s [been] really important for us to [sic] focus on balance quite a bit — like, how much ginger we use and more focusing on Mules that [sic] can be really widely revered,” said Mahoney. “This one steps out into a different world with that hot ginger to add a little bit of spice and differentiation.”

“I think people are going to be surprised,” Mahoney quipped.