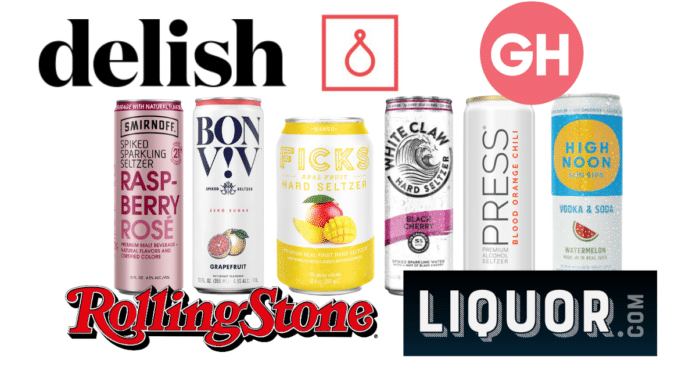 Everyone has an opinion on hard seltzer these days, including consumer sites that cover food and pop culture. With the (third annual) Summer of Hard Seltzer just beginning, major consumer outlets are reviewing and publishing their top choices for spiked and sparkling sips. But with so many options, where does one begin?

Presenting the only hard seltzer review you need this season. We read all of the major reviews so you don’t have to, and present you with the definitive list of the summer’s best seltzers, according to consumer media.

High Noon Sun Sips are a ready-to-drink (RTD) vodka soda with a serious cult following. According to Delish, its use of vodka rather than malt liquor “gives the seltzer a light, crisp taste.” Although it comes in a variety of summery flavors, Liquor.com says “crowd-pleasing flavors include Watermelon, Peach, Pineapple, Grapefruit and Lime.”

According to Delish, its use of vodka rather than malt liquor “gives the seltzer a light, crisp taste.”

Although it comes in a variety of summery flavors, Liquor.com says “crowd-pleasing flavors include Watermelon, Peach, Pineapple, Grapefruit and Lime.”

Thanks to Smirnoff Spiked Sparkling Seltzer, it has never been easier to rosé all day. The sugar free seltzers contain 90 calories per can and just one carb per 12 oz. can, making it a delicious lighter option.

According to Good Housekeeping, who named it the “Best Rosé Hard Seltzer,” “tasters appreciated the floral notes in the Raspberry Rosé, but also had good things to say about the Pink Apple and White Peach.”

One of the original hard seltzers to hit the market, multiple outlets compared BON V!V’s Grapefruit hard seltzer to a spiked version of one of La Croix’s most popular flavors.

“Fans of botanicals will love the Pear Elderflower and Clementine Hibiscus seltzers,” the magazine says.

Good Housekeeping describes it as “slightly sweet, mild, and not too boozy.” Other honorable mentions for the OG hard seltzer include Natural Lime and Mango.

Black Cherry remains the most popular flavor of White Claw hard seltzer, despite plenty of innovation from the folks at Mark Anthony Brands.

Ficks is a craft seltzer from California’s wine country that made the list on several “best of” reviews. Rolling Stone described it as “like a boozier juice box, at 5% ABV and a mere 100 calories, drinking one of these feels like a less pretentious ride through wine country.”

According to VinePair.com, Ficks Mango is “the best of the best. The tropical aromas arrive with vibrant and refreshing bluster, while the intensity of flavor matches its rich orange-juice hue.”

PRESS’ Blood Orange Chili is a strong favorite, showing up on several lists. PRESS is a company founded by Amy Walberg, and as a self-proclaimed foody, admits the brand’s flavors are inspired by her culinary travels.

The 110-calorie offering does not skimp on the Scoville units, mixing fragrant citrus with nose-prickling peppery spice.