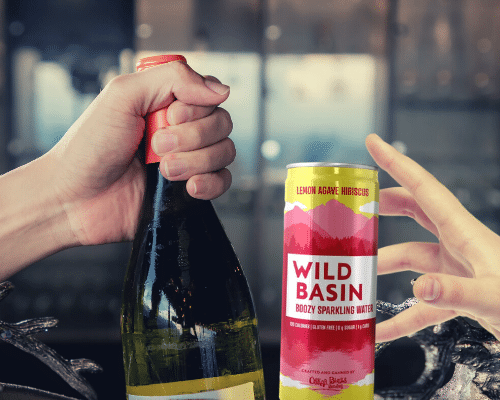 The holidays are approaching – traditionally a time for indulging in delicious food and drinks with friends and family.

As consumers begin planning holiday menus and parties in a social-distanced world, let’s explore a question that ranks high on Google Trends: is hard seltzer healthier than wine? We’ve already examined the differences between hard seltzer and beer; now it’s time to see how spiked and sparkling beverages measure up to vino.

For the purposes of this article, we’ll focus on hard seltzers with a fermented malt or sugar base, although some hard seltzers, such as Barefoot and Miami Cocktails, are actually made with wine!

One of the draws of hard seltzer for many people is its lower alcohol content, compared with most alcoholic beverages. While there are lots of both lower and higher ABV hard seltzers hitting the market, the average is between 4.5 to 5 percent ABV, making it pretty comparable to a light beer.

According to Alcohol.org, wine falls between 12 to 14 percent ABV on average, making a standard size glass of wine over twice the amount of alcohol of a standard seltzer. There are lighter wines that fall as low as 5 to 7 percent ABV, such as moscatos and rieslings. Conversely, some Californian zinfandels and Australian shiraz wines can reach 16 to 18 percent ABV.

While there is certainly a range in alcohol content among wines, most of them fall above 12 percent versus an average of 5 percent for hard seltzers. That means you and drink 12 ounces of hard seltzer for every 5 ounces of wine.  It’s easy to see how alcohol intake can creep up as you sip and sip.

It’s no secret that too much alcohol can be a bad thing. Hard seltzers provide a lower ABV option that are still fun and flavorful.

Most hard seltzers fall right around 90 to 100 calories per 12-ounce can and are low in both sugar and carbs. White Claw set the standard which many spiked and sparkling drinks have followed with 100 calories, 2 grams of sugar, 2 carbs, and 5 percent ABV per standard can.

The average glass of wine weighs in a little heavier, at an average of 123 calories per five ounce glass. Wines with a higher alcohol content of course have more calories, too. Sugars range from one gram to seven grams, depending on how sweet the wine is, and the average number of carbs per serving is four.

The typical glass of wine is slightly higher in carbs and calories than your average seltzer, while sugar content ranges from on par to quite a bit higher depending on how sweet you like your wine.

Like hard seltzer, most wines are naturally gluten free because they are made from grapes. However, wine does contain sulfites – a preservative used to maintain the flavor and freshness of wine.

Many consumers suffer from an intolerance to sulfites. HealthLine.com says the side effects include “hives, swelling, and stomach pain,” which makes wine too much trouble to enjoy for many folks.

While many vineyards do sell sulfite-free wines, they can be few and far between. Hard seltzer does not typically contain sulfites, making them a healthier option for those with an intolerance.