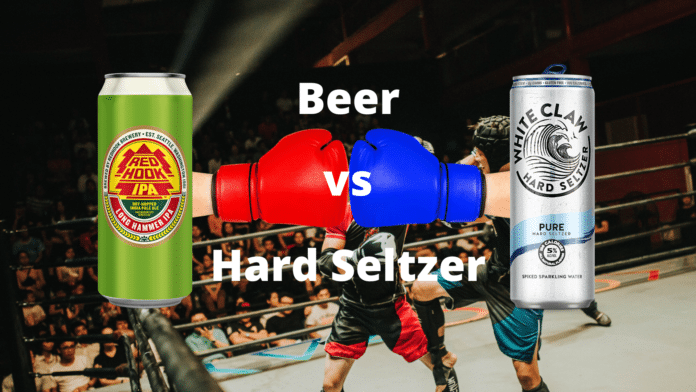 Less alcohol, calories, carbs, and gluten matter to many.

Some people on the internet have been saying lately that the “19” in COVID-19 is in reference to the pounds you will gain during the pandemic, and for many of us this joke rings true. The decrease in outdoor activities and the closing of gyms, in combination with an increase in fast food and delivery to your door (who else is tired of washing dishes three times a day?) have contributed to many feeling out of shape and less healthy in general.

So as we start to set up our home gyms and do more meal prep each week in an effort to curb the pounds, it might help to take a look at our favorite alcoholic drinks as well, bringing one question to mind especially: is hard seltzer healthier than beer? Let’s take a look.

We’ll start with the ABV (alcohol by volume) of each. In general, hard seltzers land in the 4.5 – 5% ABV range, similar to a “light” beer. Regular domestic beers tend to fall between 5 and 6% ABV, with a majority of craft beers ranging even higher. As much as we love our boozy beverages, it goes without saying that too much alcohol is never a good thing for the human body. For a further breakdown of ABV percentages in hard seltzers, beer, and liquor, check out our article here. Next up we’ll take a look at those dreaded carbohydrates.

It goes without saying that, following the popularity of the Atkins Diet and those similar to it, carbohydrates are a big no-no when it comes to weight management. America is a country known for its obesity levels, and keeping our bodies healthy requires keeping an eye on the scale to a point. Luckily, hard seltzers overwhelmingly beat out beer when it comes to less carbohydrates. For instance, a 12oz Sierra Nevada Pale Ale contains roughly 175 calories and 14.6 grams of carbohydrates, while a Truly Hard Seltzer contains only 100 calories and 2 grams of carbs. The difference is clear. For more information on calories and carbs click here.

Another appealing health-related benefit for many drinkers is the lack of gluten in the majority of hard seltzers. While there are certainly low-gluten and gluten-free beers, their availability is absolutely limited, not just by brand, but by flavor and variety of taste as well. Hard seltzers solve that problem by a landslide, with ever expanding brands like Evil Twin Brewing’s Evil Water, who boast flavors like cherry cola, salted caramel, and even marshmallow. Being gluten-free or having an intolerance to gluten is no longer a roadblock for those who want to try a world of flavors. For more information about gluten and hard seltzers click here.

With the above information becoming increasingly known, it’s not surprising to see many drinkers of the world putting aside their beer in favor of hard seltzers. And while the hard seltzer trend may have seemed initially to be a choice of millennial drinkers, it’s clear for older drinkers that as their metabolism slows, hard seltzers will be there in ways beers just can’t.