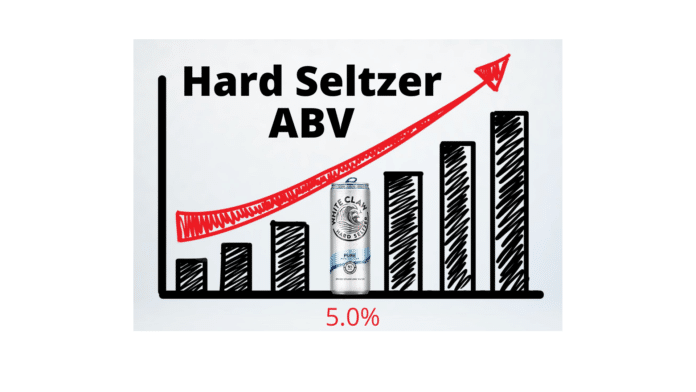 Hard seltzer is the perfect summer beverage; it’s light and sparkling, low in sugar and carbs, and comes in a variety of fruity flavors. It’s typically low in alcohol and primarily made of water, which makes it a great session beverage to drink during a day at the pool.

Much of hard seltzer’s early popularity was due to its healthier, better-for-you profile – it’s smooth and easy to drink. Yet as hard seltzer’s popularity continues to grow and more companies enter the space, the spiked and sparkling profile is starting to change. Companies are getting creative with flavors and spirits alike, and seltzers are getting stronger and harder.

AB InBev is getting in on the harder seltzer action. Similar to PBR Stronger Seltzer, this month it released its first imperial seltzer through the Bud Light Platinum label. Both beverages contain eight percent ABV, which makes it quite a bit stronger than the average three to five percent we’re used to seeing in our alcoholic bubbly waters.

With more alcohol of course comes more calories. According to Anheuser-Busch, “the new [eight percent] ABV seltzer is made with cane sugar, sparkling water, natural fruit flavors, agave, and is only 170 calories” per 12 oz. can. By comparison, the original Bud Light Seltzer is 100 calories and five percent ABV.

“Our strategy has and remains on giving our fans what they want and creating innovations that attract new drinkers to the Bud Light Family, all while remaining competitive in the market,” said VP of marketing Andy Goeler. As more brewers and distillers debut their own strong hard seltzers, a higher alcohol option is necessary in order to stay competitive.

The term imperial in brewing originally referred to “beers specially made for the crowned heads of Europe,” according to the Oxford Companion of Beer. However, today it typically just means “stronger than usual,” which could make both Bud Light Platinum Seltzer and PBR Stronger Seltzer “imperial” by the modern definition, although a host of craft options are truly entering the imperial strata.

Craft brewers and distillers are experimenting with vodka, gin, and tequila to make premium hard seltzers and ready-to-drink (RTD) canned cocktails, and these liquor based beverages also tend to be stronger than your average Truly or White Claw. Colorado’s Green Mountain Beer Company released its Imperial Hard Seltzer, which tops Platinum Seltzer at a whopping 9% ABV.

The Boston Beer Company’s popular brand Truly is workshopping their own harder seltzer. Currently Truly Extra Hard Seltzer is being tested in New York markets. Available in Peach Mango and Black Raspberry, these harder Truly flavors contain 8% ABV. Will this entry into the imperial strata finally push Truly ahead of their closest competitor, White Claw? With the new Extra Hard Seltzer, the Boston Beer Company is demonstrating that it’s listening and responding to consumer demand.

As beverage companies continue to experiment with organic ingredients, different types of alcohol, and new flavors, we’re going to see the hard seltzer industry change in exciting ways. Distillers and craft brewers like Green Mountain are changing the game, raising quality standards, and forcing larger companies like AB InBev to adapt in order to stay relevant and competitive.