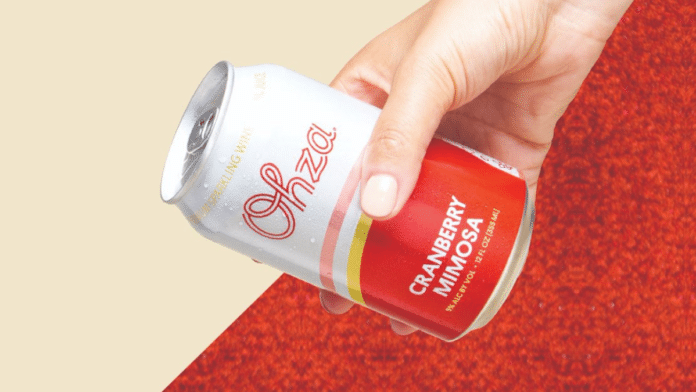 Cambridge, MA is home to a lot of great ideas. The city is home to both Harvard University and MIT, and now Ohza, a line of canned mimosas containing premium brut sparkling wine and real fruit juice. Ohza bills itself as a “premium mimosa company,” made using quality ingredients with a lighter profile than the homemade version.

The company was born after “four friends attempted to mix some mimosas on a tippy boat off Cape Cod.” Now they aim to “bring a taste of brunch wherever you wander” with three initial flavors: Classic Mimosa, Classic Bellini, and Mango Mimosa. The canned cocktails are indeed more conveniently portable than a traditional mimosa, making them the perfect option for your socially distanced outdoor brunch.

Each flavor contains 140 calories per 12-ounce can, five percent ABV, and between 20 – 30 percent real juice. They range between eight to 11 grams of sugar, which Ohza points out is “up to 80 percent less than making your own.” Each serving also averages around 60 percent fewer calories than homemade mimosas.

Ohza is releasing a new flavor – Cranberry Mimosa – just in time for Thanksgiving. The beverage company calls it a “refreshingly tart mimosa” that is a “nod to Cape Cod roots.” It’s the perfect way to bring the taste of New England to your holiday weekend brunch.

The company’s founder, Ryan Ayotte, says that the cranberry flavor was requested by fans, and Ohza is excited to deliver. “After months of requests and countless taste tests, we’re thrilled to introduce a refreshingly tart mimosa that uses real cranberry juice and our signature zero sugar bubbly”, says Ayotte.

The company’s founder, Ryan Ayotte, says that the cranberry flavor was requested by fans, and Ohza is excited to deliver.

Ohza sells its champagne cocktails directly to consumers in 43 states via its website, and offers free shipping on orders over $50. Consumers can order 12 packs of individual flavors and variety 24 packs which each feature three flavors (Classic Mimosa, Classic Bellini, and either the Mango or Cranberry Mimosa). Consumers in the New England region can also find Ohza in stores or from Drizly by clicking here.

The canned champagne cocktail is part of a growing trend of ready-to-drink (RTD) cocktails and wine spritzers, which have been increasing in popularity along with hard seltzer. Yet Ayotte points out that the RTD market has tended to trend toward summer drinks thus far. With the Cranberry Mimosa, Ohza wanted to craft an RTD that would carry consumers into the fall and winter.

“With the rapid growth of the RTD category, we’ve noticed an overwhelming skew toward summer flavors. Despite Cranberry being a year-round offering for us, we see a huge opportunity for Ohza and Cranberry Mimosa specifically, to be the go-to RTD cocktail for the cooler months ahead,” says Ayotte.

According to the company, one six pack of cans is the serving equivalent of nine champagne flutes, or two bottles of champagne plus one half carton of juice. Ohza Cranberry Mimosa is the perfect RTD to give your holiday celebration a little extra sparkle.

With so many delicious seasonal seltzers hitting the market, it’s going to be a delicious holiday season.