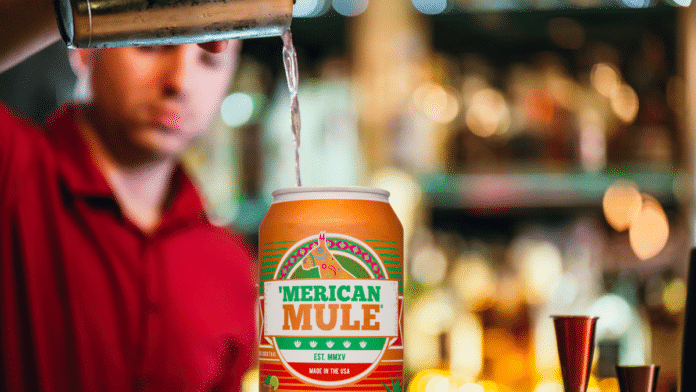 In an exclusive interview with Hard Seltzer News, Co-founder of Merican Mule, Dean Mahoney, spoke about the long road to developing bartender quality cocktails in a can.

The story of ‘Merican Mule began around 2015, when Mahoney — a New England native — and his two fellow co-founders were living in Los Angeles and working in the tech industry. At the time, mules and copper mugs were popping up all over Los Angeles area bars and restaurants.

“L.A.’s always at the forefront of setting trends, so we became like Mule connoisseurs right away,” said Mahoney. “[We] started going around to different bars and restaurants and trying different mules.”

Their bar-hopping mule adventures inspired the group of friends to attempt their own mule creations at home. However, their first few tries were lacking the heart of a bartender-made cocktail experience.

“We really loved them, and then we went back home to make them on our own — like on our patio — and we realized there [were] all these ginger beers…We always tried to make it,” Mahoney said. “We could never really get the formula, get the mix, as well as it was done at the bars in Los Angeles.”

This conundrum pushed Mahoney and friends to examine this potential gap in the marketplace.

A Mission is Born

“That was really kind of the ‘aha’ moment where we said why hasn’t someone just premixed everything in a can?” Mahoney said. “And that’s where we really came up with that initial concept and idea.”

“The initial thought was if this is going to work, the liquid in the can has to be [sic] beyond exceptional,” explained Mahoney. “We were actually looking at what was happening in the craft beer space and how craft beer was really disrupting some of the domestic beers, and they were able to justify a lot higher price point because of the ingredients they were using in their products.”

And so, they took that craft beer mentality and applied it to their mission.

Failures were key to success

“We kinda said we’re really not going to stop on this first iteration of formulation until it’s absolutely perfect and it tastes like a next-generation ready to drink to where it knocks people’s socks off,” Mahoney said.

Mahoney began developing the product in his home kitchen, fermenting his own ginger beer with yeast and all sorts of other experimental ingredients.

“I put it in my fridge, and I had two-liter bottles exploding at midnight,” Mahoney confessed. “I didn’t know what I was doing.”

Soon, ‘Merican Mule pulled together a team of scientists and chemists with decades of experience to get the ball rolling. They then worked with these experts and tweaked the formula based on their personal tastes. In total, ‘Merican Mule spent about seven months developing and perfecting their product.

“We were really comparing it a lot of times to what was happening when we were going to bars and restaurants, and how they got their [sic] naturally made ginger syrup from scratch, like muddled limes and just overall aromatic experience was just superb,” said Mahoney. “So, we spent quite a bit of time evaluated every single ingredient that goes into the product.”

Made from scratch goodness

Merican Mule does not use any off the shelf ginger beer, and Mahoney emphasized that the brand and its products are built from the ground up, ingredient by ingredient. All in all, the hard work and dedication to bartender quality and a high-end RTD experience meant no short cuts or compromises were made in the development.

“Even though it took a while, I think we were motivated just because we knew as soon as we started the process, it was pretty good early on,” Mahoney said. “We were perfectionists about getting it exactly where we wanted to in the end.”