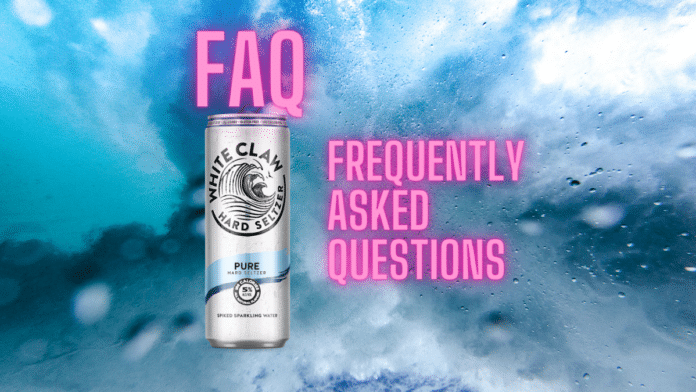 Is hard seltzer the same as beer?

Yes and no. Some hard seltzers are made with malt liquor, which makes them, like beer, a malt beverage, so they are in the same genre as beer. But in addition to fewer sugars, calories, and carbs (on average) seltzers have a lighter mouthfeel from beer and a completely different taste. A Bud Light Seltzer tastes more like a LaCroix sparkling water than an actual Bud Light beer. Plus not all seltzers contain malt liquor; they can be brewed with cane sugar, or made with wine or even spirits.

Is hard seltzer the same as a wine cooler?

No! Although several new wine spritzers have hit the market since the dawn of the seltzer craze, they differ from the overly sweet wine coolers of the 1980s and ‘90s. Most spiked and sparkling canned beverages are nowhere near as sweet as a bottled Seagram’s, however we are seeing more wineries expand into the canned seltzer space.

Are spiked and sparkling waters really a healthier option?

Alcowaters end to be less bad for you than other adult beverages. On average, they have fewer sugar, calories, and carbs than beer or wine, and less alcohol than wine or hard liquor. It’s a smooth session beverage that you can drink all day without feeling too bloated or getting too drunk, as it’s made primarily of sparkling water. There is plenty of evidence that hard seltzer is a healthier option than its alcoholic alternatives.

Is hard seltzer gluten-free and vegan?

Usually! Since most of its flavoring and alcohol comes from fruit and cane sugar, hard seltzers are almost always naturally gluten-free. Unless a certain flavor contains honey or another specific ingredient, or finings, they are typically vegan as well.

What makes hard seltzer hard? (Or, what kind of alcohol is in it?)

The OG seltzers like White Claw and Truly are almost all malt beverages. Yet as more companies enter the hard seltzer space, its definition is expanding. We’re starting to see more options made with organic spirits, wine or liquor, including vodka, gin, and tequila.

Why isn’t there an imperial or higher alcohol hard seltzer option?

There is! We’re seeing more and more imperial or higher ABV seltzers enter the market, with AB InBev’s Bud Light Platinum being the most recent notable example, along with its PBR Stronger Seltzer. “Brewed for the night,” as the company says, Bud Light Platinum contains eight pervent ABV compared to Bud Light Seltzer’s five percent. The Boston Beer Company’s Truly is also currently testing a stronger seltzer in NY markets.

What is a craft hard seltzer?

A craft hard seltzer is one that is brewed – usually by a microbrewery – using high quality ingredients. As popular tastes turn away from beer, many craft breweries are experimenting with seltzer; they’re raising the stakes by using premium, organic ingredients. Popular examples include those made with top shelf spirits, organic fruit and botanicals, or spring water sourced from the Rocky Mountains.

How is hard seltzer packaged?

Hard seltzer is usually sold in a six pack, 12-pack, or single cans. Early industry leaders White Claw and Truly set the standard of selling their spiked and sparkling malt beverages in the 12-ounce skinny can, as well as selling variety 12-packs containing three cans each of four different flavors. Both companies also offer popular flavors in a single can “tallboy” option, as does the new imperial Bud Light Platinum Seltzer (it actually comes in 12, 16 or 24 ounce cans). To date many seltzers have followed the skinny can/variety pack formula, yet as more craft breweries enter the space we’re seeing this challenged quite a bit as craft breweries release their seltzers in traditional squatty cans.

It is! At least in some places; we’re starting to see a rise in so-called seltzeries opening across the country. Breweries will often offer a seltzer on tap in their own tasting rooms or brew pubs. Seltzer purists insist that the best way to drink it is on tap. Some even sell seltzers to go in growlers! Mixologists have also been experimenting with using hard seltzers as cocktail mixers.

Where can I buy hard seltzer?

The hard seltzer market is continuously expanding into more retail locations; many stadiums and even some airlines offer hard seltzer to their passengers, although it tends to be more popular as an off-site beverage. If your local grocery or liquor store doesn’t have a satisfactory seltzer selection, or you’re having trouble locating a new brand you read about, try Drizly! Described as the “Amazon of liquor,” Drizly is an app that lets customers order alcohol for delivery from local businesses. It’s a great way to find new seltzer options while supporting local retail.

Why does hard seltzer come in those skinny cans?

Because White Claw did it first? In all seriousness, although the same size as a standard squatty can, the taller, skinnier cans play into hard seltzer’s reputation as a lighter, leaner option. Yet as more companies enter the market, many are going back to the classic squatty can that fits your koozies – unless you’re in the market for skinny can koozies, which definitely exist.

Is there a less sweet version of hard seltzer?

Yes! If the subtle fruit flavors of hard seltzer are still too sweet for your pallet, White Claw actually offers a “Pure” flavor, meant to mimic a vodka soda. Truly also offers its Rose’ flavor, modeled after a dry blush wine.

Ready-to-drink (RTD) cocktails are rising in popularity. With the rise in popularity of hard seltzers, more distilleries are turning to canned, premixed beverages in order to meet consumer demand and to help boost sluggish sales caused by the COVID-19 impact on bars & restaurants. Often made with a sparkling water base, we’re seeing an increase among RTD options made from spirits like vodka, gin, tequila, and even whiskey.

What is a spritzer?

A Spritzer is a spiked and sparkling beverage made with wine as the alcohol. As hard seltzers rise in popularity as a light and bubbly option, many wineries are getting in on the fun.

Let us know if you have any hard questions you’d like answered!